Haryana Police were deployed in large numbers after the protesters gathered

Yet again Muslims peacefully offering namaz (or daily prayers) in Gurgaon’s Sector 12-A were faced with crowds of protesters – many reportedly from right-wing groups – shouting slogans against the prayers and holding up placards that read “Gurgaon administration, wake up from your sleep”.

Police were deployed in large numbers and around 30 protesters were detained.

After vociferous protests earlier this month in Sector 12-A and 47, police acted quickly today to ensure minimum disturbance.

Visuals from today’s incident showed a small group of people (almost none wearing face masks) milling about holding up cardboard signs and shouting “band karo, band karo“, or “stop it, stop it”.

Another video showed a few of the men being led away by police; a large number of uniformed policemen can be seen in this clip, and police barricades have been set up all around.

This is the third straight week daily prayers have been disrupted; last week Muslims praying on private property, also in Sector 12-A, had to deal with a crowd shouting ‘Jai Shri Ram‘.

Among those challenging the namaz last week was a local lawyer – a Kulbhushan Bharadwaj – who can be seen arguing with the cops. A former BJP leader, he represented the Jamia Millia shooter when he was arrested by Gurgaon Police for allegedly making communal speeches.

The week before that similarly tense scenes were seen in Sector 47 (a more urban area), where namaz offered outdoors on government-owned land (land set aside for the purpose of prayers) triggered demands that it stop or move indoors. 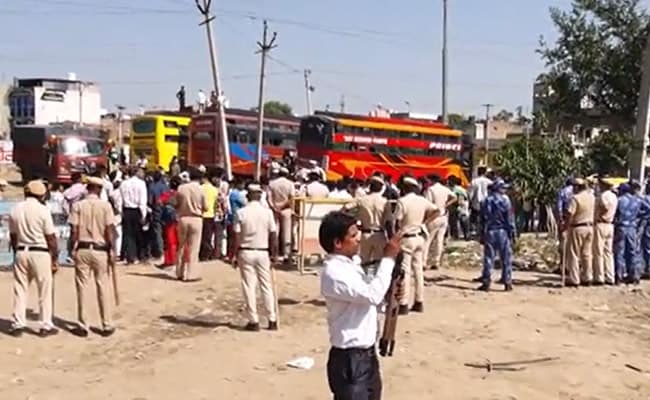 Sector 47 residents claim “mischievous elements” or “Rohingya refugees” use the prayers as an excuse to commit crimes in the area. Over the past weeks they’ve turned up shouting ‘Jai Shri Ram‘ and holding placards that read ‘stop namaz in open spaces’ or ‘offer namaz in mosques’.

On both occasions crowds only dispersed after the police offered ‘assurances’ relate to a dispute over where Muslims can offer prayers.

Both Sector 47 and Sector 12-A are on a list of sites that are part of 37 identified by the Gurgaon administration on which Muslims are ‘allowed’ to offer prayers. These were chosen after talks between Hindu and Muslims in the wake of similar events in 2018.

Shortly after last week’s protests Union Minister Krishan Pal Gurjar – the junior Social Justice minister said people must be allowed to pray if the sites had, in fact, been designated for such purposes.

Earlier this month Haryana Chief Minister ML Khattar (speaking after the Sector 47 protests) said everyone had a right to pray, but also that “those offering prayers should not block road traffic”.

“No one should hurt sentiments nor should anyone disrupt prayers… and if they are praying at designated sites, as suggested by district administration, that should not be disrupted,” he said.

“The issue should be resolved amicably and the local administration is handling it well,” he added.

admin - October 28, 2021 0
<!-- -->CBI has identified a banana plantation owner as accused in the elephant death case. (File)New Delhi: The Central Bureau of Investigation...

7 Ways To Manage Blood Sugar Levels During This Festive Season