India has deployed US-made weaponry along its border with China. (File)

India has deployed recently acquired US-made weaponry along its border with China, part of a new offensive force to bolster its capabilities as the countries remain deadlocked over territory.

The buildup in India’s northeast is centered on the Tawang Plateau adjoining Bhutan and Tibet, a piece of land claimed by China but controlled by India. It holds historical political and military significance: In 1959, the Dalai Lama fled to India across nearby mountain passes to escape a Chinese military operation. Three years later, both sides fought a war in the area.

Now US-manufactured Chinook helicopters, ultra-light towed howitzers and rifles as well as domestically made supersonic cruise missiles and a new-age surveillance system will back Indian troops in areas bordering eastern Tibet. The weapons have all been acquired in the past few years as defense ties between the US and India have strengthened due to rising concerns about Chinese assertiveness. 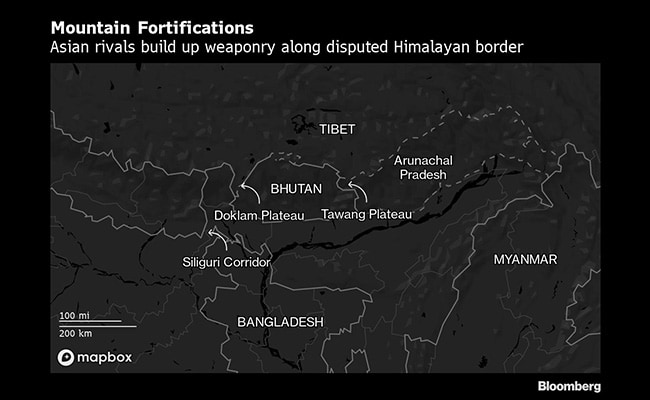 Indian military personnel escorted a group of reporters through the region last week to highlight the country’s new offensive capabilities. Eastern Army Commander Lieutenant General Manoj Pandey said that boots, armor, artillery and air support were being combined to make the force “agile, lean and mean so that we can employ faster.”

“The Mountain Strike Corps is fully operationalized,” he said. “All units including combat and combat support units are fully raised and equipped.”

India has moved to bolster its defenses along the border with China after the worst fighting in decades last year led to the deaths of at least 20 Indian army personnel and four Chinese soldiers. While the two sides have engaged in talks to disengage, they have yet to agree on pulling back from a key flashpoint in another border area near Kashmir.

India’s deployments show a frustration with the lack of progress on talks with China, said Rajeswari Pillai Rajagopalan, director of the Center for Security, Strategy and Technology at the Observer Research Foundation in New Delhi. “That we are looking at a second winter engaged at the border explains why India needs to work on building its capabilities and infrastructure at the border and source more equipment from partners like the US,” she said.

Adding to the friction is a new Chinese boundary law that Beijing said was a “unified standard for strengthening border management.” India warned that the new law, passed last week, could affect ongoing border tensions, which China’s Foreign Ministry including Wang Wenbin said was “undue speculation.”

The bulk of India’s fresh forces have gone to the east, where a formation of at least 30,000 troops have been deployed over the past year. Prime Minister Narendra Modi’s government has been concerned about a repeat of a bitter 1962 battle in the Himalayas, when the People’s Liberation Army took Tawang as the under-prepared and poorly led Indian Army withdrew. Unused bunkers and war memorials still dot the lone road that connects Tawang to the plains below.

India now wants to use the area to “punch” China if necessary, according to a senior military commander familiar with the situation. The area is crucial to India’s defenses, as the borders stretching east to Myanmar are “poorly held” and the narrow corridor passing by Bhutan, Nepal and Bangladesh — which holds gas pipelines and railroads connecting central India to the northeast — is of ” critical concern,” the commander said.

The Indian army’s offensive option along the Tawang Plateau, which is in the middle of those areas, would allow India to counter China as it steps up military activity in the area. General Pande said there was a “marginal increase in Chinese patrols in the eastern sector along the Line of Actual Control,” a disputed but de facto boundary between the two countries that runs along the Himalayas.

The LAC is patrolled by India and China, although General Pandey said the scale and duration of PLA troop exercises on their side have increased since the stand-off in the eastern area of ​​Ladakh last year. India has “adequate number of troops available,” the general said, without giving numbers.

A newly raised Indian Army aviation brigade, based about 300 kilometers (186 miles) south of Tawang, forms a critical component of the new offensive plan. This was the same base that US aviators took off from to fight the Japanese Imperial Army in China and assist the nationalist forces there in World War II.

The Indian aviation brigade is now equipped with Chinook helicopters, which can ferry US-made light howitzers and troops quickly across mountains. It also has Israeli-made unmanned aerial vehicles that relay real-time pictures of the adversary round the clock.

“The Chinook are a game changer,” said Major Kartik, a pilot in the newly-formed brigade. “They offer mobility and maneuverability like never before — troops and artillery guns can be carried from one mountain ridge to other quickly.”

The preparations go beyond just boots and new equipment. Engineers in India are digging the world’s longest two-lane tunnel, which is 13,000 feet (4,000 meters) above sea level and runs underneath a critical mountain pass currently accessible by a 317-kilometer meandering road to the disputed border.

Construction is ahead of schedule and the structure will be operational by next June, said Colonel Prakshit Mehra, a project director of the tunnel. “Currently snow clearance of the pass requires massive effort, and even then only certain kind of vehicles can cross,” he said. “The tunnel will reduce travel time by hours, allowing faster and unhindered movement of troops round the year.”

The tunnel, once operationalized, would ensure that India can move its troops without detection by China, according to a senior military commander who asked not to be identified.

“We are more comfortable than what we were a few years ago,” said Major General Zubin A. Minwalla, commander of the 5-Mountain Division of the Indian Army.

Weddings in India are a grandiose affair with multiple functions and ceremonies. Food forms an integral part of such weddings, and, more often...

Planning To Buy A Used Renault Triber? Pros And Cons