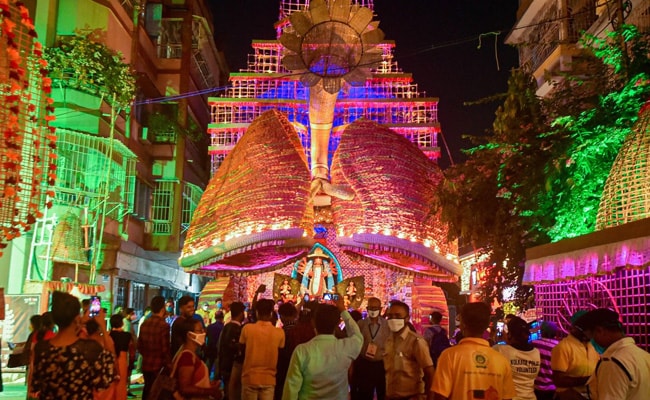 Large housing complexes of Kolkata are gearing up to organise the Durga Puja this year, albeit in a low-key manner amid the COVID-19 pandemic, making vaccination compulsory for priests, “dhakis” (drummers) and everyone associated with the four-day festival to be held in October.

Though several housing societies have completed the “khuti puja” – a ritual of worshipping a pole before putting up Durga puja pandals, they may have to alter some plans later as the threat of a possible third wave of the pandemic is there.

“Priests, dhakis, pandal makers, electricians, those who will go through the nitty-gritty – all associated with the puja have to be inoculated with at least one dose of vaccine,” Silver Spring housing complex secretary Indranil Choudhury said.

Entry of visitors from outside during the puja will be regulated and it has been made mandatory for them to get at least one jab of the vaccine or carry COVID-19 negative certificate, he said.

“But we may have to make changes in the plans in case we are hit with the third wave (of the pandemic),” said the secretary of the housing society in East Kolkata where the “khuti puja” was held on Raksha Bandhan day on August 22 following Covid norms.

Only a certain number of puja committee members will have access inside the pandal, he said.

Preparations for the puja, which will be held on a small scale, are in full swing in Urbana Housing Complex of south Kolkata, said its resident, film-maker Arindam Sil.

“Of the 3000 residents in our society, there are more than 700 children. They were depressed for the past several months. The occasion of khuti puja on August 15 broke that gloom,” Mr Sil said.

The organisers are not taking any chances. They have made vaccination compulsory for all involved, keeping in mind the situation and the threat of the third wave, he said.

“Entry of outsiders will be regulated and everyone present will have to wear masks. The puja will be held but the scale of celebrations will be decided later keeping in mind the situation in October,” an organiser of the Central Enclave said.

At Durganagar Government Housing in the northern fringes of the city, the cultural soiree has been scrapped like last year.

The Durga Puja was held in a similar fashion in all these housing complexes last year when the pandemic struck.